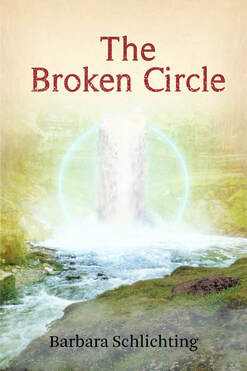 InThe Broken Circle, Vicky’s fate isn’t as dire, but it is tragic nonetheless. Early reviews for the book have been very favorable. Carl Brookins, author and review of crime fiction stories, said, “It's an interesting concept with lots of potential and the women central to the story have led interesting lives.  The structure of the narrative works well and the concept of succeeding chapters narrated by the different women also works well.”

Carol Kusnierek said, “Schlichting’s touching, sometimes harrowing narrative explores the serious issues of PTSD, alcoholism, homosexuality, and sexual violence… Readers will root for these women as they struggle to learn the truth about their friend’s fate.”

And Christine Husom, author of The Winnebago County Mysteries and the Snow Globe Shop Mysteries, said, “In Barbara Schlichting's The Broken Circle, the death of their childhood friend reunites three women decades later. Long-held secrets, another friend’s mysterious disappearance, and unrequited love rise to the surface, begging for resolve. As they each work to reconcile the past and look to the future, they discover the steps and actions they need to take for healing closure.”
Mary Feliz
intimate look at an important story July 30, 2019
Barbara Schlichting provides an enjoyable read that touches seldom discussed horrors of the Vietnam Era and other issues that reverberate through our society today. She does it in a gentle and intimate fashion without preaching or scolding, through the lives of characters we want to spend time with and learn more about. I highly recommend it. This is a bold and brave addition to the titles available from this author. Bravo. 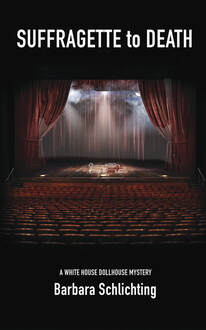 A fun and timely mystery relevant to current day issues. During Woodrow Wilson’s presidency the fight for women’s right to vote came to a head, but the struggle to gain that right was not easy. Many of the women activists were arrested and brutally treated while in jail. Although Wilson did ultimately sign the 19thAmendment, some have wondered if the president was aware of how badly the women were treated and if he approved. Echoes of our times.
White House Dollhouse Shop proprietor, Liv Reynolds, is drawn into the still relevant controversy when the Little Theater next to her shop puts on a play about Wilson during the period when he was incapacitated by a stroke, and his wife, Edith, effectively took over running the White House. When Liv’s assistant, who was to play Edith, is killed on opening night, she decides to find out who did it. Then her shop becomes the target of a mysterious vandal who seems particularly interested in the Wilson White House. Are the two incidents connected? Another murder in the theater makes her even more determined to find out what is going on.
A fun read with lots of information about several of our First Ladies, particularly Edith Wilson or Mrs. President as she was sometimes referred to. And a reminder of the sacrifices our grandmothers made to give women the right to vote.  Kate Wyland, author of romantic suspense equestrian novels.


"Barbara Schlichting has combined her love for history and mystery in the clever White House Dollhouse Series. In Edith Wilson: The Fourteen Points To Death, the stage is set—literally—for another intriguing plot, leaving the reader to try to figure out whodunnit. I love how Barbara takes an historical event and builds a modern day mystery around it. She shines at breathing life into our country’s former First Ladies, and Edith Wilson was a great choice for this story." Christine Husom, author of the Winnebago County Mysteries and the Snow Globe Shop Mysteries. 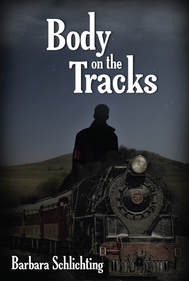 ​                                  Body on the Tracks
You'll feel like a passenger on the Zephyr train as author Barbara Schlichting leads you through the Midwest to find a killer in this World War II era story complete with spies, agents, colorful passengers, and an unexpected romance.
- Thekla Madsen is co-author of Bad JuJu in Cleveland and Angry Nurse----

Joyce reviewed Body on the Tracks
Great Murder Mystery December 28, 2017
It is a well written murder mystery just like her 1st Ladies Mystery Series. I love how she mixes fiction with real facts of history. That makes it interesting. Looking forward to reading the next book in the series yet to come out. Soon I hope? Keep up the good work Barb...proud of your accomplishments.
Rylie Solberg reviewed Body on the Tracks
Good Book December 22, 2017 It you a very good story line.It was a good murder mystery book i enjoyed it very much. I would give it a 91/2 because some names are harder to read,other then that very good book​
​4.0 out of 5 starsOSS AGENT NEEDS TRAIN RIDE TO CORRAL NAZI ESPIONAGE
October 9, 2019
Format: Paperback
I like the way the story careened across the Midwest on the train. Author captured place and historical time very well. The relationship between OSS agent and Zepherette, Brita, rises and falls like a yo-yo at times and works as counterpoint to Nazi secret agent espionage. Pace is good and while the book could use a keener final editorial eye, its a fun and worthwhile read . Carl Brookins
​       5.0 out of 5 starsGreat book! Great author!!
October 30, 2019
Format: Paperback
Taylor Munter
5.0 out of 5 starsGreat book! Great author!!
I love how she combines fiction with real life!! It makes it really Interesting! Such a great author!!
5.0 out of 5 starsA mind-blowing and immersive read! WOW
August 2, 2018
Format: Paperback
With each page turned, Body on the Tracks kept me wondering what was going to happen next. With each chapter, the train clacked across the tracks and her vivid images gave me a glimpse of each passing town. The characters are colorful. I didn't know who the killer was until the very end. It was a joyful train ride into the past!    Kailyn
​ 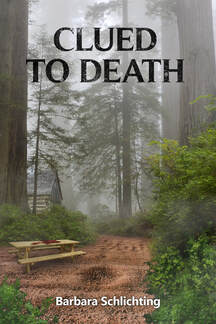 Liv is beside herself. Someone has murdered her friend and employee, and now it’s up to her to figure things out. Enter an old land title, which may or may not have belonged to Teddy Roosevelt, a couple of assaults, a deranged murderer, and suddenly Liv has her hands very full.


Rebecca Rosenberg reviewed Clued to Death: A White House Dollhouse mystery
Fun mystery read to relax with!
I love these cozy mysteries, by Barbara Schlichting! With the world so complicated these days, A FIRST LADY Mystery Series where Modern characters make History, are feel good books that are great to cuddle up on the sofa, or better yet, in the bathtub. A delicious escape while you learn history! 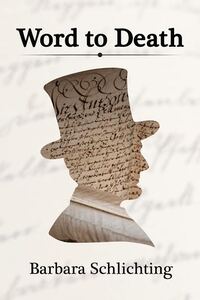 "Liv Reynolds is obsessed with keeping the history of America’s first ladies alive. So when a Mary Todd Lincoln impersonator winds up dead, Liv takes it personally. Soon she finds herself in a deadly race with the murderer to find a priceless historical document. If Words Could Kill will keep you guessing." Barbara Deese, No Ordinary Women mysteries

Rebecca Rosenberg reviewed Word to Death a White House Dollhouse Mystery
Like Murder She Wrote!
Love these cozy mysteries, by Barbara Schlichting! With the world so complicated these days, A FIRST LADY Mystery Series where Modern characters make History, are feel good books that are great to cuddle up on the sofa, or better yet, in the bathtub. A delicious escape while you learn history! 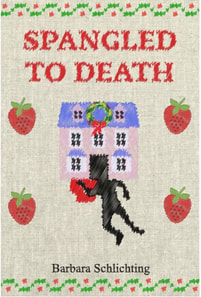 "An unexpected discovery of letters from Dolley Madison should excite Liv, but instead it leads her into a tangle of theft, murder and bewildering clues. Spangled to Death draws upon important historic facts to solve a modern-day mystery.” Beth Solheim, author of At Witt’s End and Outwitted.

"Liv Anderson, a distant descendant of Dolley Madison, owns a shop that features intricately crafted First Lady dolls, as well as handmade White House reproductions. First Lady enthusiasts flock to Liv’s shop, but not all have noble intentions. When one of those enthusiasts is murdered, Liv realizes that her own safety is in jeopardy. Aided by her grandparents and by her police officer fiancé, she embarks on a mission to unravel the secrets of history . . . secrets that might well get her killed.

I enjoyed following Liv on her exploits to expose a deadly killer, but even more fun was the discovery of the historical artifacts as the story progressed. The ending was terrifically satisfying, with all the stray knots tied neatly into place. I’m anxious to read book two in this delightful new series!"

Linda Reilly  Author of Out of the Dying Pan

Spangled to Death by Author Barbara Schlichting. Welcome to Liv Anderson's White House Dollhouse shop and to Schlichting's first First Lady Mystery, here featuring Dolley Madison, wife of James, and a distant relative of Liv's. A TV personality comes to the shop, but the meeting is oddly off-kilter, she snatches the Madison dolls, leaves with her mysterious retinue, and within hours is found dead atop a Madison-era dollhouse, the shop floor awash in her gore.  Liv must solve the mystery while arranging for her upcoming wedding to fiance' Aaron, a police officer. The murder's tentacles reach back to Dolley herself, and Schlichting's historical knowledge supports the intricate plot. Not doubt we'll again meet best friend Maggie and Liv's staunch grandparents, Marie and August, in future First Lady Mysteries.  Great debut.  Lavender Magazine-Ethan Boatner-July 2016

Spangled to Death: White House Dollhouse Mystery By Barbara Schlichting by Sandra Murphy
"Liv delivers information about the different White Houses, how the décor changed, the building was enlarged, and history preserved over the years to the current administration without interrupting the tale of the murder. Aaron is a good boyfriend, now going to be husband as they plan their wedding over the Christmas holidays. Grandma and Grandpa are an understanding pair although worried about what’s happening at the shop. There’s Dorrie and Max too, both work for Liv. Pay close attention when reading—you don’t want to miss a clue.'

A Historic Family Secret Covered In Blood
I must admit that at first I was thinking that this cozy might just be too cozy for me. Then, I opened the novel. What had seemed as a too 'theme' conscious book, was in reality, one heck of a suspense mystery novel.

Ms. Schlichting, whom I first learned about on 'Twitter' has an incredible knowledge of Presidential First Ladies of History, and an incredible sense of storytelling. True the heroine, Olivia is enamored with her beau, Aaron. True, Olivia has a relationship with her Grandparents that defies most families. True, Olivia is unusual in her business relationships (with the First Ladies.) Also, true is the fact that the story grabs you, presents multiple possible suspects, has you trying to figure out truth from fiction and then not caring about it at all, and finding out you wish History followed some fiction.

Finally, you have on-page action and you find yourself trying to figure out just what the 'Secret' is. With multiple red-herrings...you end up sighing at the ending and going to see if the Author has written any further editions in the series...yes, she has!

Give this novel a read. Rather ignore the cover and the theme and allow yourselves to enter the adventure of a true mystery. The best kind...a family secret! And, you will find some National pride as a bonus. Enjoy!   J &amp; L Rigod


​Great Mystery Series
Enjoyed all three of her First Lady Mystery Series. I hope there will be more in the series yet to come & I would recommend them for others to read. Very well written & kept me intrigued from chapter to chapter. Joyce